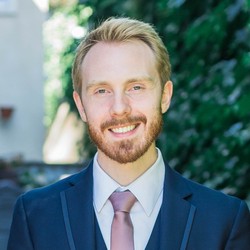 Séamas Weech is an NSERC Postdoctoral Research Fellow at the VR and Mobility Lab at McGill University, Montreal, Canada. He studies the multisensory basis of motion sickness and sensorimotor adaptation in virtual environments.

His ongoing projects are broadly focused on how the central nervous system encodes and processes uncertainty. This interest has led to research on biological motion, time perception, balance control, self-motion (vection), and perception/action in simulated environments.

He spent two years as a Postdoctoral Researcher with Michael Barnett-Cowan at the University of Waterloo’s Department of Kinesiology, which was funded by Oculus Research (Facebook Reality Labs). Before that he received a PhD from Queen’s University.

‘Why you feel motion sickness during virtual reality’